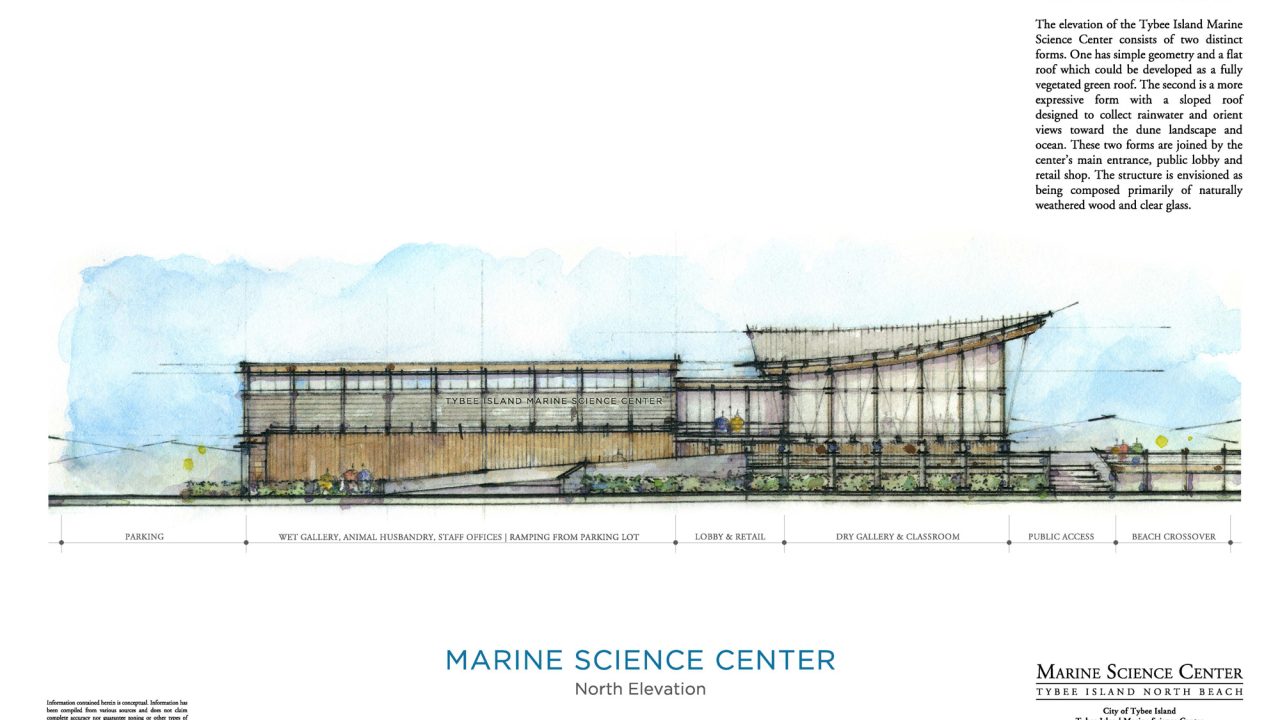 The $4 million building will sit north of the parking lot, and the public can expect that end of the lot and the northern-most beach crossover to be closed until the project is completed, estimated to be February 2020. Between 30 and 40 parking spaces are expected to be unavailable as a result.

The building has been in the works so long that $200,000 of the funding is coming from the 2003 Special Purpose Local Option Sales Tax, or SPLOST, said Tybee Mayor Jason Buelterman. He expects it’ll be worth the wait.

“The Marine Science Center has done a really good job,” Buelterman said. “They’ve brought out thousands of kids from the Savannah-Chatham schools. It’s good not just for Tybee but for the whole community, I think.”

Buelterman said Tybee expects about $3.5 million of the funding to come through bonds issued through the Chatham County Recreational Authority, which is set to officially decide on the matter next month. Depending on the interest rate, Tybee will repay the bonds at the rate of about $260,000 a year for 20 years. Another $300,000 is from Tybee’s general fund surplus. The building and its price tag are unusual for Tybee, a city of 3,100 that gets 1 million annual visitors.

“We’ve been conservative in our spending over the years,” Buelterman said. “We haven’t invested in this type of thing.”

Savannah-based architects Sottile & Sottile along with Kern Co. designed the building with input from the public at a community design session. The resulting plan calls for an elevated building with two distinct galleries. Situated to make a minimal impact on the dunes and to catch prevailing winds for passive cooling and ventilation, the building’s facade will be clear glass and naturally weathered wood. With 5,400 square feet in its main floor, it will host interpretive exhibits, a retail shop, outdoor educational programming, an amphitheater, and other outdoor recreational elements.

“Tybee Island acts as the gateway to the Atlantic for hundreds of thousands of visitors each year,” said Tybee Island Marine Science Center Executive Director Maria Procopio. “This expanded facility will enable the science center to capture more of those visitors to educate and cultivate responsible stewardship.”

The nonprofit science center will be launching its own campaign to raise an estimated $1.2 million for the center’s exhibits and furnishings.

“The center’s board of directors have been working on attaining a larger facility for over 10 years and are grateful to the City of Tybee Island for standing behind the project and adding value to the beach experience,” Board President Cathy Sakas said.

The north beach area was selected after several previous studies and research as the best location for the new center. The current Marine Science Center at the base of the ramp to the Parker Pier and Pavilion on the island’s south end will continue in operation until they are able to move into the new facility. The old building will then be used for services needed closer to the south beach area, possibly for police and lifeguards, Buelterman said.