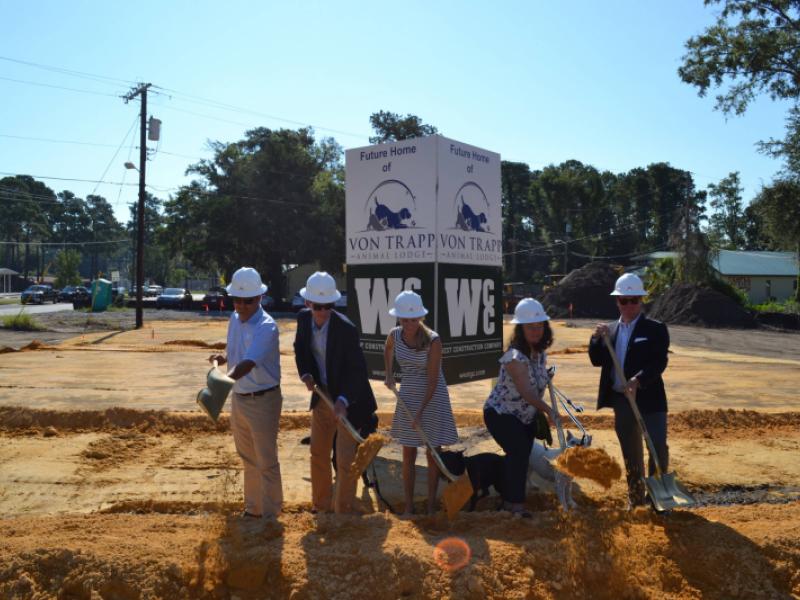 Dog owners in Savannah are about to be introduced to a whole new level of canine care as the Von Trapp Animal Lodge broke ground on a new veterinary rehab and daycare center.

The 3,700-square-foot facility, which is expected to open March 2018, will offer rehabilitation and fitness programs for dogs, including hydrotherapy, acupuncture and laser therapy. Located at 6500 Waters Ave., the site will provide daycare for nearly two dozen dogs as well as offering eight cat “condos.”

The dog daycare will consist of 21 dog runs, including three for geriatric and non-sociable dogs as well as a 2,000 square-foot, zero-entry outdoor pool, according to veterinarian Betsy von Trapp. Pet owners will also be able to check on their dogs and cats through an internet portal tied to 16 web cameras.

The surname “Von Trapp” inspires thoughts of the famous Austrian family in the 1965 film, “The Sound of Music.” Von Trapp said the center will indeed feature a lodge-style exterior and decor that is not only a cheeky nod to her name, but also will make pet owners feel more comfortable at the state-of-the-art clinic.

Comprehensive veterinary centers like this are cropping up in other parts of the country, but Savannah does not have one, according to owner Betsy von Trapp. She looked at other similar centers to glean the best ideas from each.

“There are some upscale boutique daycares (in Savannah), but none are run by a licensed veterinarian. I thought that would be appealing to pet owners who know that there is someone on-site who can address any medical issues as they come up. There isn’t any place in town that offers everything we’re going to offer.”

The new center is designed to help dogs recover from surgeries or injuries as well as other osteopathic or neuromuscular issues after visiting a primary care vet. Additionally, overweight dogs — a growing problem — can be taken to the center for weight loss.

She returned home to take a post with Case Veterinary Hospital, where she became interested in complementary care which typically comes after a long-term diagnosis. However, after nearly three years at Case, she elected to pursue her dream of owning her own practice.

“It’s always been my dream,” she said, adding that the clinic will employ as many as eight people once fully staffed.

Von Trapp is working with the Humane Society for Greater Savannah, establishing a “dog of the week” program. The site will provide daycare for a different adoptable dog weekly, helping to socialize the dog and increasing its chances of being adopted.